Ben and Abby got together via Skype. The sound quality isn't perfect, but we think it's pretty good!


Abby talked a little bit about the Ada Lovelace socks again, and revealed to those who might not know, that Ada Lovelace is a real historical person who was the daughter of Lord Byron (the poet) as well as the FIRST computer programmer!


Ben continues to work his Mojo magic. His yarn stash finally arrived, so more knitting should be forthcoming.


Abby gave up on the flame socks, but not before taking a few photos. 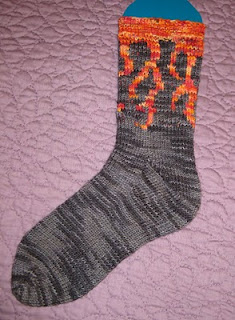 She frogged the flames and is now working on some near-vanilla socks with the gray yarn. This is her current "knitting in class" project.
"Acorns" proved more of a challenge than Abby originally anticipated, but she's having a great time with it now that she's gotten a few repeats done. 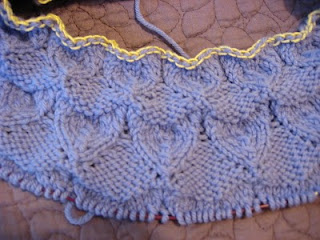 Neither Ben nor Abby had anything to share in "Grande". We just didn't finish anything this week!
In "Bite" we reviewed Boardwalk Empire. We'd love to hear your reviews as well. BTW, there are some cool wallpapers on the HBO site for you to download.

Ben has a cardigan "brewing"; he's working out some unique construction to eliminate some seams while emphasizing others. Abby continues to "brewed" about gauge, and noted that Amy Tyler did a "wraps per inch" experiment which showed just how subjective measurements can be. An excerpt of the article can be found here.
In "Stir" Abby has finished spinning her "sample singles" from the Susan's Spinning Bunny Merino-Tencel. She'll ply, swatch and report back shortly.
Chai brings us a story of Sukkah building in Olympia WA, and a rodent invasion in Abby's apartment. Bonus: Check out some very unusual sukkot (plural of sukkah) in New York City here!