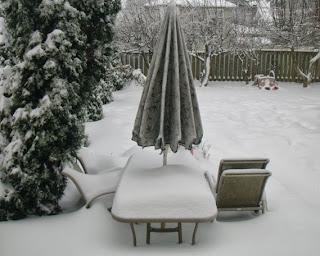 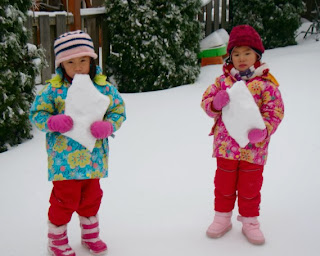 
Latte: Karen finished one of her Port Ludlow socks and is picking up stitches on the gusset of the second sock. Her Vivian sweater is (mostly) back on track now. She is very happy about two listeners suggestions for ways to deal with closing a sock toe without a darning needle. The first is from listener LibraryPaste on Ravelry, who recommended the Knitting Daily Finishing Tip: For Those Who Hate the Kitchener Stitch. Additionally listener knerdy suggested another way to finish the toe - see post #15 in the Ravelry thread for details. The thread also has some extremely helpful suggestions for sock patterns for Lederhosen.

Abby is working on her Abby's Narcissa socks from Mountain Colors Crazy Foot. She has turned the heel on one sock and is about to turn the heel on the second sock. When working both socks Abby has a method of turning each heel separately using a third circular needle. This boggled Karen, who thought the needles and socks looked a lot like an octopus.

Abby has finished the first sleeve of her Lady Grey shrug.

Abby's Color Affection shawl in Malabrigo Silkpaca is also still in process. She is not in love with knitting it, but thinks she will like the shawl when it's done. The knitting itself is background knitting, and not interesting enough to hold her attention if she isn't doing something else at the same time. Which may be why Abby it itching to start something new.

Bitter Cup: Karen has another round of Bitter Cup with  Alewives Cowl. Abby was right. The needs some time to sit quietly and reflect on its behavior. Abby is thinking about casting on her own Alewives Cowl now.

Karen also has a little Vivian sweater bitterness. She overshot the point in the chart where the sleeves join the body and will need to undo two rows of knitting when it comes time to join everything. This leads to the question - do you have to read the pattern before beginning a project. Abby and Paula of the Knitting Pipeline disagree on this subject.

Brewing: Abby is brewing a baby-sized Star Trek the Next Generation commander's shirt for Miss Kalendar of The Brass Needles' new baby. The question at hand: how to fashion a baby-safe communicator pin? Abby's current plan is to use wool felt and metallic thread embroidery to make the pin, then sew the pin to the sweater. She is planning to be done within two weeks.

Karen is brewing hats for her daughters. Pattern suggestions are much appreciated. She has considered making kid-sized Wurms, but isn't sure. She has also just started Percy (the shawl), not to be confused with Percy (her cat). It is lovely. Abby suggested using Judy's Magic Cast-on to start the garter tab. Genius! 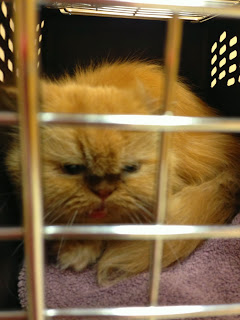 
Stir: Karen is spinning away on the Dragonfly Fibers merino/silk fiber she got at the first Sock Summit. She is spinning it into fine singles on her Hansen miniSpinner and waiting to decide how she wants to ply them. A miniSpinner is also on Abby's list of 'things she wants to buy soon'.

Abby's Matchless is still making a ticking noise. She has spoken with Sandi at Purlesence Yarns, but even after following her sage advice the wheel is still ticking. Abby is now on the trail of a local person who should be able to diagnose the problem.

Sofa: Abby and Karen are both watching Project Runway: Season 12. They both still dislike Ken intensely. Neither of them was very happy about the Belk challenge this week either. Karen is still rooting for Alexandria and Dom. While Abby prefers Kate and Helen.

They are both excited about the cast announcement for Project Runway All Stars Season 3. In an unsurprising show of partisanship, Karen will be rooting for hometown boy Seth Aaron Henderson. Abby has not yet revealed her favorite.

Karen also noticed that Arsenio Hall has a TV show again. When did that happen?

Abby expressed her frustration with the current and final season of Dexter. She loves Michael C. Hall, but hates what has happened with his character and feels this season is a train wreck.

Abby has also vowed to watch at least one episode of Duck Dynasty after hearing the Stephen Thompson and Linda Holmes discuss how much they enjoy it on this episode of Pop Culture Happy Hour.

Menu: Abby has been experimenting with making a Paleo Diet version of her Aztec Chocolate ice cream using first Trader Joe's coconut cream, then coconut sugar and coconut milk in the base. Taste testing of the latest version indicated that she should not have left out the brandy. However, as Abby learns, you cannot go out late and buy brandy or any other kind of liquor for that matter in the State of Oregon. We have standards, people.

Events: Oregon Flock and Fiber Festival. We're going! It's like a county fair, with only the cute animals.

Take a Bite: Abby needs to replace her iron and ironing board. Karen has an Oliso, but she has heard on the Internet that gravity-feed steam irons are the coolest. What do you think?
Posted by Karen at 12:02 AM