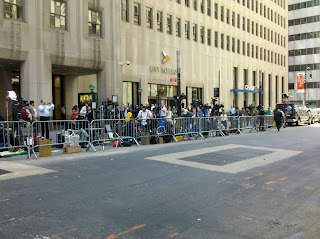 Listen here.
Latte: Abby's working on Vonica and Elektra. Ben is working on Bitterroot and the He Said She Said Cowl.
Grande: Ben finished his He Said She Said cap.
Brewing: Ben is thinking about making his first buttoned cardigan. One pattern in contention is George by Jane Ellison. Alternatively, he might design his own. Abby has been trying to figure out the best way to put buttonholes on her Cassidy. She decided, with Ben's help, to make "vertical" buttonholes using the intarsia method. The buttonholes will then appear horizontal on the button band.
Bitter Cup: Elektra provided some challenges, but everything is OK now!
Chai: Abby saw the gawkers waiting for an appearance by alleged rapist Dominique Strauss-Kahn (see above), saw some steam punky sculpture in a subway station, and toured the Bronx. So why is it called "the" Bronx? 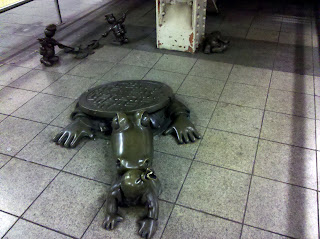 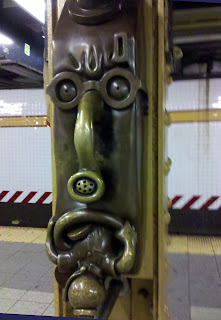 Cup of Joe to Go: Ben knit an entire hat during one (full day) class; Abby's not so sure she'll get much knitting done in class this summer.
Bite Back: We enjoyed the guilty pleasures that listeners shared with us. Ben mentioned Studio 60 on Sunset Strip which is available on Netflix instant watch.
Tip Jar: Ben says: take all your knitting notions with you, always! Abby says: when you are frogging a project with beads, set a terrycloth towel down on the floor, sit on the floor and let the towel catch your beads. Also: be willing to think creatively when you have a "bitter cup" and know that your first solution to a problem might not be the best (or last).
Posted by Abby at 9:02 AM